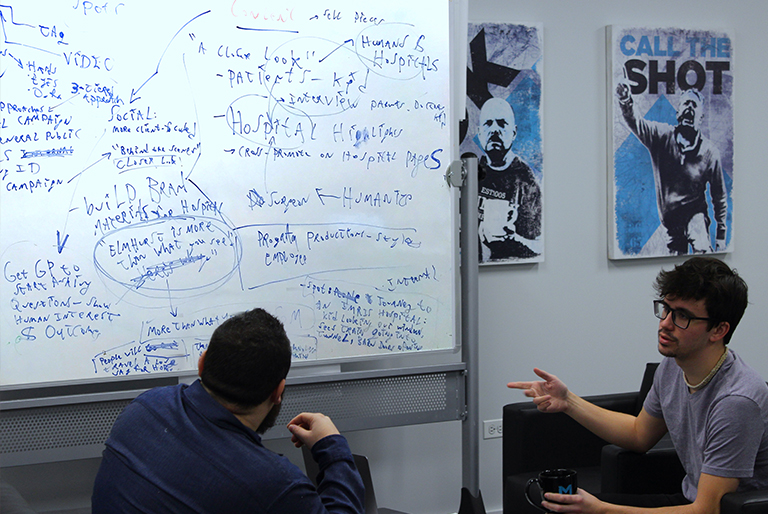 MACLYN’s creative team gathers in the “War Room” for an early Ideation session, a no-holds-barred brainstorm – where ideas fly, inspiration strikes and a concept springs to life.

It’s time for our Creative Warriors to do what they do best.

Armed with the knowledge they gained during the “Discovery” phase, our team returns to MACLYN for “Ideation,” a series of brainstorms and creative sessions that ultimately lead to the creation of the new IMRIS brand.

“The more we looked into surgeons, IMRIS’ major target audience, the more we realized how cultured they are. They love theatre. They love to read. Some are into literature, like Shakespeare. Many surgeons actually listen to music while they operate. So, things like art, music, literature – those became huge, pervasive themes in the new brand.”

Jay Paonessa, Creative Director & Vice President: “When we enter a brainstorm, we’re trying to capture lightning in a bottle. To do that, you have to have the right conditions. And you have to make a lot of lightning.”

Johnny Tijerina, Senior Art Director: “First thing, we started taping inspiration up on the board, sketching-out ideas… things we had learned at the tradeshows and the interviews, quotes that seemed important. Basically, we put everything out there.”

Troy Kelleher, Senior Copywriter: “We have a policy where, in a brainstorm, we never really reject an idea. So, when we started generating concepts during the IMRIS brainstorm, we felt comfortable saying anything – even if it’s kind of ridiculous.

Johnny: “A lot of the best ideas actually come from joking around. During the IMRIS brainstorm, we started talking about these crazy scenes happening in the operating room; and, for a while, we were laughing about them…”

Troy: “…But then, there was this moment where we were like, Hey! There’s something there.”

Jay: “I met with the team after one of those initial brainstorms, and they had sketched this image of someone playing guitar in the operating room. That caught my eye. When we started getting into the philosophy behind the concept… that’s when I realized it was something special.”

DRAWING ON OUR INSPIRATIONS.

We leveraged an element of fantasy to distinguish the IMRIS brand from any competitors in the medical industry.

Jay: “The ideas we create during Ideation are all born from what happens in Discovery, that period where we immerse ourselves in the target’s world, the world of a surgeon.”

Johnny: “One of the books we read, When Breath Becomes Air, kept coming up. We were talking about it during Ideation; we all liked how it let you see through the eyes of a surgeon. That idea of a surgeon’s perspective was what sparked the whole concept.”

Troy: “That was our lightning strike. Surgeons don’t see patients as just patients. They see patients as real people who have lives beyond the operating room. So, we thought, what if we take that idea literally?”

Jay: “We built these scenes of humanity in the operating room: a ballerina dancing across the table, a family sharing a quiet moment. The message is powerful. It’s saying: We’re IMRIS, and we understand things from your perspective, the perspective of a surgeon. We get it. We understand that patients are never just patients. They’re somebody’s mother, somebody’s father. They’re a musician, a ballerina, an artist. That knowledge is behind everything we do.

“We took that concept and expanded it. Everything IMRIS does is for humanity. It’s ALWAYS For the Human Experience.”

Johnny: “After visiting the tradeshows and seeing all the other brands, we knew nobody else was doing anything like this. We knew that, if we focused less on the technology and more on the people, the brand would have a major impact.”

With a sleek font and an iconic symbol, the IMRIS logo pays homage to the company’s past, while looking forward to the future.

Johnny: “At this point, we’re taking those concepts, and we’re translating them into an ownable look and a feel. That comes through in the imagery, the mark, etc. The visuals have to be cohesive, engaging and like nothing else; so, when people look at the brand, they know it’s IMRIS.”

Jay: “Above all, the visual language embodies the Value Proposition – the essence of the brand. For IMRIS, the imagery had to align with this idea of humanity, but it also had to feel high-tech. Combining those 2 elements called for some serious alchemy, but it was essential to defining the IMRIS brand.”

Johnny: “Don’t underestimate the importance of color. The brand speaks through it. For IMRIS, we started with a cool, blue palette that felt “technological.” But then, we threw in a pop of pink, a hit of neon green – colors that feel vibrant and alive. This was the element of humanity being brought to the forefront of the brand.”

IMRIS’ primary color palette, called “A Symphony of Innovation,” functions as a canvas to the vibrant secondary palette, “A Harmony of Humanity.” With this color scheme, humanity will always be the hero of the image.

Jay: “When we create a brand, we aren’t just building logos and a color palette. We’re creating a language, both written and visual. We’re lending voice to the brand, and that’s when it comes to life.”

Troy: “So, at this point, we have the look, the language – and the core creative idea holding it all together. Now, it’s time to put the concept into action.”

UP NEXT… MAKING THE IMRIS BRAND, PART 4: CREATION.