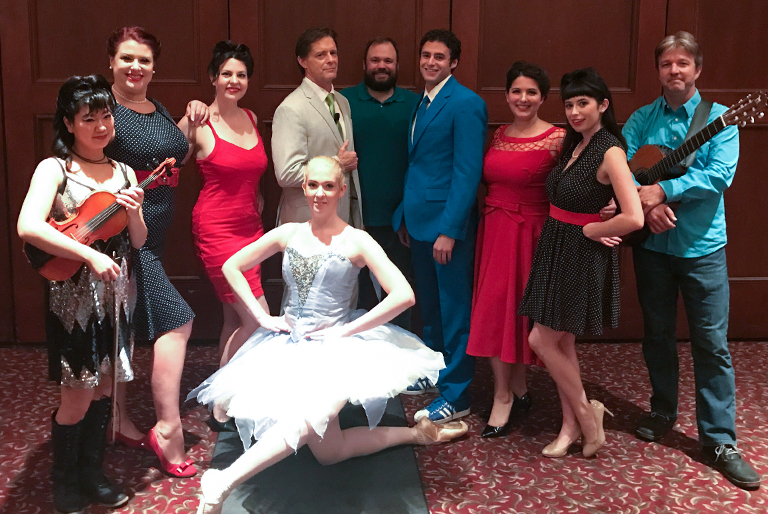 We assembled a ragtag team of talent: a pro chalk artist, a theatre troupe and a pair of musicians. Together, we put on an IMRIS-branded, black-box theatre production.

The new IMRIS brand is ready to be unleashed. Now, it’s time for the MACLYN team to create an IMRIS-only launch event.

We called it “The Big Think.” Employees from every corner of the IMRIS world gathered in the heartland for a massive, company-wide brainstorm – an immersive introduction to their new brand.

To cap off the event, MACLYN’s creative warriors threw an IMRIS extravaganza, complete with flying ballerinas, badass chalk art and more brains than you would believe.

Here’s how it all went down.

Courtney Healy, Strategic Planner: “The launch of a brand is huge. Almost as important as the brand itself. For IMRIS, their mission was to redefine themselves; but, before they could redefine themselves in the world’s eyes, they had to get their own employees to buy in. They had to leverage the new brand to define their company culture.”

Bill Murphy, Agency President, Managing Partner: “You can’t force company culture. It just happens. But, you can encourage it. You can make the right conditions for culture to happen. That’s what we did with the IMRIS launch event; we set the groundwork for the brand’s future.”

Jay Paonessa, Creative Director, VP: “This is the watershed moment. For IMRIS, this is the beginning, the curtain-draw. It’s their brand stepping into the world. It has to be an unforgettable experience.”

While writing the script for a black-box theatre production, MACLYN’s creative team used kings, queens and pawns for staging.

Troy Kelleher, Senior Copywriter: “The thing about a play is… it’s impermanent. It happens, and then it’s done. That’s what makes it significant for the audience; they feel like it’s something they own, something that only happened to them.”

Johnny Tijerina, Senior Art Director: “Our mission is to give the IMRIS employees ownership of their brand. It’s not enough to just show them the new brand and say, ‘here you go!’ We have to give them something unique, something they can hold onto. The brand is all about “The Human Experience,” so, let’s give them an experience they won’t forget.”

Troy: “What if it’s a performance? What if it’s something live and dramatic and exclusive to their employees? So, we thought…”

During rehearsal, MACLYN’s creative director consults with “Frick and Frack,” who embody the left and right sides of the brain.

As IMRIS employees arrive at the brand launch party, they’re immersed in a branded experience.

Jay: “The most powerful brands live in the sub-conscious. Our mission for The Big Think, the IMRIS brand launch event, wasn’t just to introduce the new brand. It was to get the employees in the right mindset. Inundate them with the IMRIS philosophy.”

Johnny: “Everything… the decorations, the program, the look, the language, the swag-bags, the walls of the headquarters… every detail was branded ‘For the Human Experience.’ We wanted that message to be on everyone’s mind, all the time.”

Performed for IMRIS’ entire global network of employees, “We Think. Therefore, We are IMRIS” involved a chorus line, a theatre troupe and an oversized chalk mural – drawn live, during the production.

Troy: “As everyone arrived, we had the performers sit with the crowd.

“Imagine; you’re an IMRIS employee. You’re at The Big Think, waiting for something to happen. You look around; there’s an engineer to your left and a ballerina to your right. Then, before you can ask what’s going on…”

Jay: “…There’s a clap of thunder. Loud. Everyone goes silent. A guitar strums a few chords, and a voice says, “Not long ago, in a brainstorm much like this…”

Troy: “For the play, we went back in time, to the beginning of IMRIS. We open on this scene where the 2 founders are having a conversation. They’re having a brainstorm, and it eventually leads to the company’s flagship product: the moveable iMRI.

“Throughout the conversation, you get the sense that neither of them could have come up with the concept on their own. They needed each other to form this big idea. They’re arguing, finishing each other’s…”

Jay: “…sentences. And then, at last, they have this bold, brilliant revelation. This eureka moment. That’s what it’s all about: the spirit of innovation and the necessity of collaboration. The power of thinking together.”

Troy: “And that’s really the takeaway for the IMRIS employees. You’re part of this legacy of humans working together to elevate the human experience. You belong to a history, a lineage of minds that, together, have made the world a better place.”

As the play comes to a (literally) thunderous conclusion, the new IMRIS brand video appears.

UP NEXT… MAKING THE IMRIS BRAND, PART 6: BRANDGUARD.