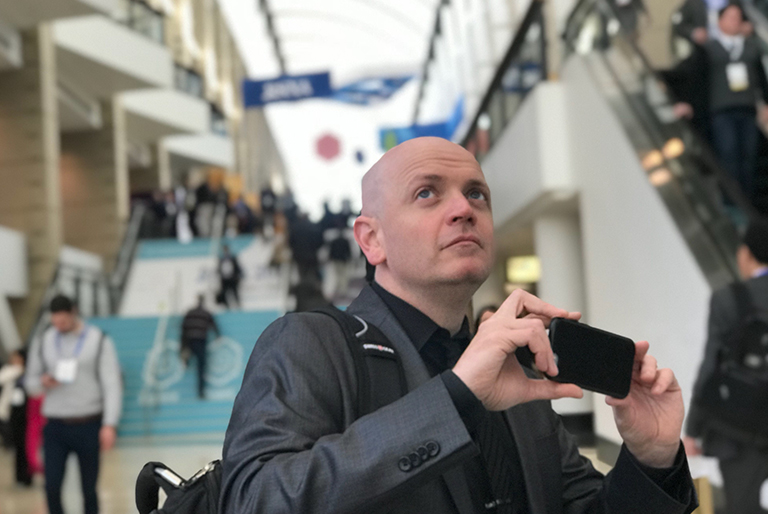 “Discovery” is an immersive research process. Before creating a brand, we explore the landscape, interviewing key industry players, scouting-out the competition and searching everywhere for inspiration.

The global medical company has joined forces with MACLYN to elevate their image from a technology provider to a life-changing innovator. Our team is ready to do what we do best: Create. But first, before we can craft a brand that evolves IMRIS as both a company and a concept, we have to gather intel.

Creative starts with understanding. Before we built the IMRIS brand, we interviewed an army of employees, customers, competitors and industry leaders.

Jay Paonessa, Creative Director & Vice President: “IMRIS had a problem: Their perception didn’t match their reality. Everyone thought they were just a product, just a machine – but they were so much more. Our mission was to change the conversation surrounding IMRIS. But first, we had to understand it.”

Courtney Healy, Senior Strategic Planner: “One of our main goals, at this stage, is to build a robust S.W.O.T. file (Strengths, Weaknesses, Opportunities, Threats). We get that information by reaching out to all the major stakeholders: surgeons, hospital administrators, some competitors, and their own people, too.

“It’s important to get the client’s employees involved right from the start. They’re some of the first people we interview. Once they’ve been part of creating the brand, they get a sense of ownership. They know they’re part of the process, and that makes them more likely to become advocates for their own brand.”

Troy Kelleher, Senior Copywriter: “You go in with this list of questions: What’s IMRIS’ greatest opportunity for growth? What does the industry think of the company? What do buyers think? The funny thing is, once you start going through the interview, you always go off-script. You go down these tangents, and that’s where you learn the most valuable stuff.”

Courtney: “For MACLYN, the “Discovery Phase” is more than just research. We’re creating the conditions where creative will succeed.”

“Advertising is mass psychology.” To create a successful brand, you have to understand your target audience. For IMRIS, that meant our creatives had to get in the minds of brain surgeons.

Jay: “You’re building narratives. You have the IMRIS narrative: A company that’s leading the medical industry forward… innovators, disruptors, world-changers. But then, there’s the misperception: That IMRIS is a company that sells equipment. We’re here to change that. We’re here to help them uncover what they believe in.”

“We’re here to bring the true IMRIS narrative to the public; that’s what being a storyteller’s all about.”

A SCOUT IN THE FIELD.

We had “boots on the ground” at med-tech’s biggest tradeshows – AANS and RSNA – gathering intel and scouting-out the competition.

Johnny Tijerina, Senior Creative Director: There’s only so much Discovery you can do in the office. To really get a handle on the industry, you have to get out there.”

Troy: “Walking the floor of the AANS tradeshow (American Association of Neurological Surgeons) was really important, for a number of reasons. We got to see what everyone else was doing, how they were presenting themselves. We got a sense of what was working, what wasn’t.

“You know, you talk to the people in the industry, and you get a sense of the conversation that’s going on behind-the-scenes… which is usually different from the carefully curated messaging you see online.”

Jay: “And then… once we know the rules of the industry, we can break them.”

From coast to coast: MACLYN’s creatives toured tradeshows in places like LA and Chicago, immersing themselves in the medical technology industry.

Jay: “The way medical technology brands were representing themselves felt very… safe. They’re showing off the technology, telling you what it does… and that’s it. Really? These aren’t just beautiful machines. They’re saving lives. They’re making families whole. These companies are changing the world.

“That’s exciting stuff. That inspires me. We should tell that story.”

Troy: “The show-floor’s crowded with all this sleek technology… and that’s it. Feels kind of cold, right? Feels like something’s missing, doesn’t it? These companies are really good at showing-off what they do; but, you get the sense they’ve forgotten WHY they do it.”

READING BETWEEN THE FRONT-LINES.

Reading was key to understanding our target audience. Paul Kalanithi’s “When Breath Becomes Air” was a favorite of our creative team, inspiring the core theme of the IMRIS brand.

Troy: “With Discovery, we’re not just testing the waters. This is the deep dive. We investigate. We interview. We consume entire libraries. Basically, we do everything possible to get in the mindset of the target market.

“As you can imagine, getting in the heads of brain surgeons is not an easy thing to do.”

Jay: “Advertising is mass psychology. We’re capturing the hearts and minds of our target. To do that, we need emotional currency. And the only way to create meaningful emotional currency is to see the world through the eyes of your audience.”

Johnny: “One of the books, “When Breath Becomes Air,” really hit me.

“It’s written by this surgeon who was dying from lung cancer while he wrote the book. He was in this horrible situation, but he had this perspective on patients, on life, on what it means to be a surgeon… that had a huge impact on our work. I was reading it at the same time as Troy. Each morning, we’d get into the office and talk about it.”

Troy: “Paul Kalanithi’s perspective resonated with us, arming us with some of that ‘emotional currency’ Jay mentioned.

“That’s the beauty of the Discovery process. You learn so much about these disciplines… and even more about the humans within them. Then, you feel good going into Ideation. You know what strings to pull.”

UP NEXT… MAKING THE IMRIS BRAND, PART 3: “IDEATION.”