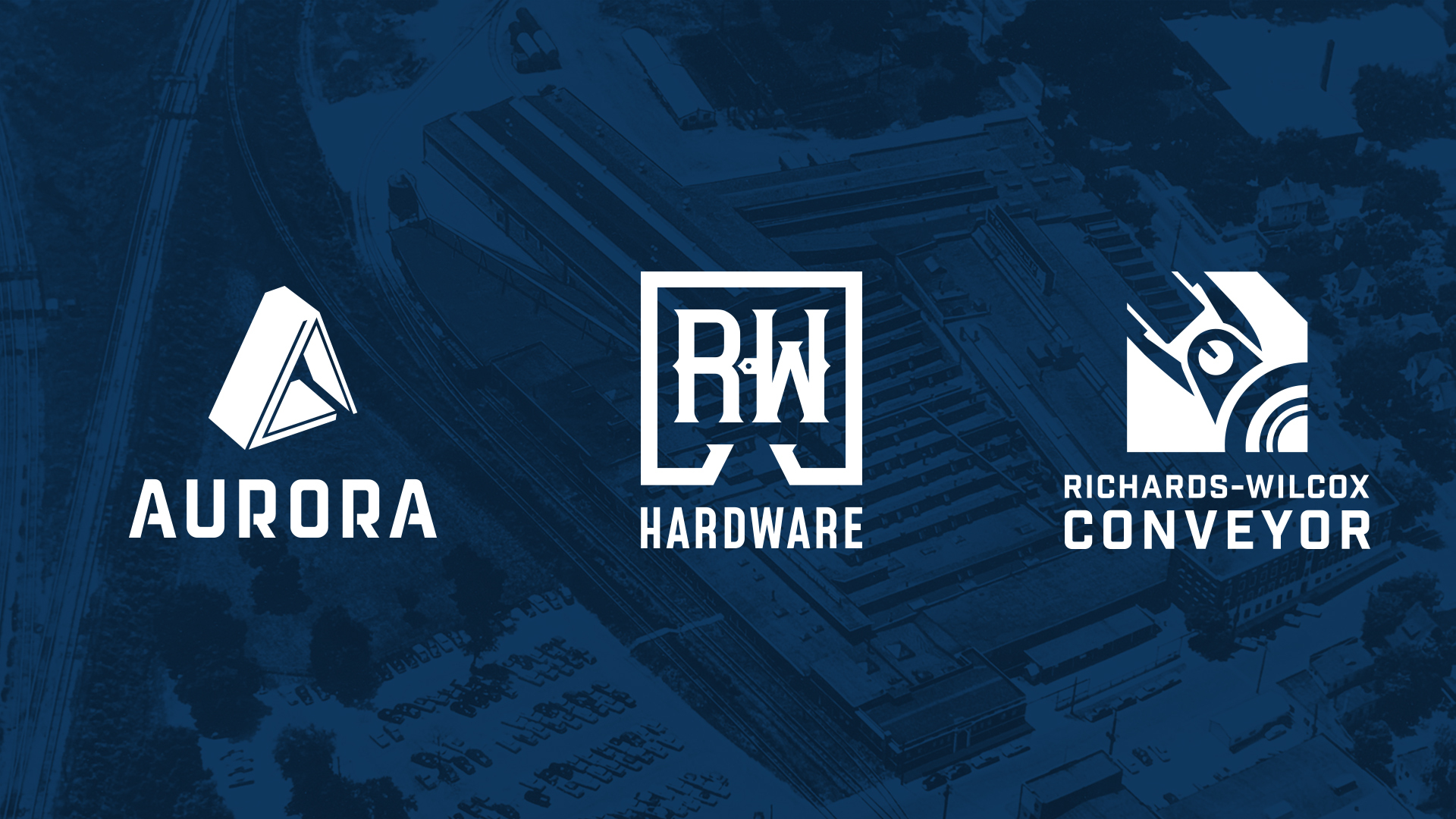 The brand you build to represent your company should be the same as the brand you put on the product itself. It embodies everything you stand for. It’s a testament to being tested. Your history, your legacy, how you make your mark.

For Richards-Wilcox, it all started with two letters forged into steel: RW.

Those two letters set their path to today. They’ve always been a promise to our customers, and to themselves. The company turned to us to help them renew that promise. So we helped them reforge their company with a rebrand.

And all the work is for naught without a strong launch. It’s the inertia that carries a brand forward.

We’ve talked about it before, but it’s important that you think about your brand launch as an internal launch, and an external launch. Like a rocket ship, a launch is really a series of launches: your internal launch gets you off the ground, and your secondary booster rockets get you to the stars.

If you debut your brand to the world before your own people, it will backfire. Not only may they be confused on how to promote it or uninspired by your new presence: they might even be resentful and hurt that they weren’t consulted. Ms. Lauryn Hill said it best: “how you gonna win if you ain’t right within?” You’ve got to get your own house in order before you can take the world, so the internal launch is truly crucial. It’s also to your own benefit to get your client involved from the jump: the RW internal launch literally couldn’t have happened without the employees, because through their interviews and insights, we discovered the gems that gave us the brand. Before we talk how we launched, here’s how the three brands formed in the first place:

The Spark of Creation

If you see hardware in a barn, zoo or stable, the odds are RW Hardware put it there. They didn’t follow trends: they created them. When you’re making a new brand, it’s all about finding the essence of who the company is. So when we thought of RW Hardware, a few words came to mind. Craft. Quality. Innovation. But it all slid into place when we heard the story of a piece of hardware installed in a Rockefeller family barn in 1927. 92 years later, it still works like the day it was made.

So our bold new brand was forged with 140 years of experience and excellence. Its look was inspired by the company’s history: from the pages of turn-of-the-century catalogs, to the enduring quality their customers depend on, RW Hardware’s new voice captures their enduring drive for timeless craftsmanship. From conversations with clients that have been with them for generations and employees that have been with them for decades, we crafted a presence that sums up centuries.

We really drilled down to the nuts and bolts of who they are, and celebrated what they continue to do like no one else for nearly a century and a half – stand the test of time against rain, wind, humidity and humanity. RW doesn’t just endure: they hold strong.

When we thought about Aurora Storage, we realized that there’s a story behind everything they store. A Ming Dynasty scroll documents the life of a pirate queen in a far-flung time. It was later smuggled out of China during a revolution, and wound up in the care of a museum. Or a revolutionary vaccine was tirelessly developed for years, by dedicated scientists. Now, it needs to be hermetically sealed and kept safe so it can save lives. For each of the markets Aurora serves, there are stories to tell. For librarians, curators, and the people that keep us safe, they preserve the precious, contain what can’t be contained, and invent ideas to protect ideas.

There’s a story behind every storage solution. So we built our brand around the stories of their customers, because Aurora Storage is the solution to every story.

Clearly we’ve did a lot of brand evolution. And it got us thinking about evolution in general. It’s not just for animals, Charles Darwin. Industry is really a survival of the fittest. And conveyor systems helped evolve the industrial age. Richards-Wilcox Conveyor became the backbone that helped automate this country.

If your conveyor goes down, your business goes down. You need something reliable and adaptive to survive in this modern industrial jungle. That’s when we realized that a conveyor-chain is like the spine of a great beast. A beast built better. Built smarter. Built stronger. Richards-Wilcox Conveyor makes conveyor systems built for the future, designed for adaptation, and engineered for evolution.

It’s a wild world out there. And with their adaptive, innovative systems, Richards-Wilcox Conveyor is engineered for evolution.

Party With Your People

We gathered the whole company together for an internal launch party.

We have to look back on where we’ve been, to look forward to where we’re going. So we explained and explored the new looks, new feels, new presences, that are true to the core of who they are.

We’re investing in what really made this company in the first place. It’s more than the steel. It’s you. It’s all of you.

Your drive.
Your sweat.
Your hustle.
Your integrity.
Your ingenuity.

You hold strong.
You are the solution to every story.
You are engineered for evolution.

So I want to renew and reaffirm our pride in our company. When you see one of our social media posts, like it. Share it. You never know whose eyes it will reach. When you’re at your next party, talk about your company: there’s no telling who’ll be there. You are our ambassadors. You are our advocates. Remember where you work. Remember who you are.

We’ve got something to help you with that.

I want you to reach under your chairs and open those coolers. Go on, I know you’ve been wondering the whole time. We’ve got you some gear to help you champion the brands.

As you open the door to your home, remember that you hold strong. As you warm up or cool down with a beverage, know that there’s a solution to every story. And as you carry the cold ones to evolve your next event, remember you’re engineered for evolution.

You hold strong. You are the solution to every story. You are engineered to evolve.”

See? He acknowledged and thanked his people, while also getting the ball rolling with merchandise and collateral to get everyone on the same page (just sayin’, you might wanna do the same) It paid off, too: before, most employees didn’t even follow their own company’s social media. Now that each entity has a fresh brand to be excited about, employees interact with social and share the love to their own followers and prospects.

Just like our internal launch was carefully crafted with custom apparel, ironwrought keychains, and other elevated collateral, the external launch was meticulously planned with a timed and calibrated content calendar. The videos and brands were teased and dropped, and all profile pictures, about sections, and personal LinkedIn accounts were changed over to the new brand assets.

When you’re launching a new brand, you can’t stop until everyone is speaking your language. One of the ways we taught our audiences that language is through case studies, the stories of our brands, which show off our capabilities, why we do what we do across a wide swing of industries. From sliding door hardware on a Buffet family amphitheater, to the legendary storage archives of McDonald’s, to an elite manufacturer of airline parts that helps the world take flight, our content generation stressed how vital RW was to the world’s infrastructure.

Tricks of the Tradeshow

And the brand made a big roar in the wild at trade shows.

At the big AZA zoo conference, we designed a thrilling demonstration of the signature RW Hardware crowding gate. A rhino charged directly at the viewer to pulse-pounding sound effects and beating drums: then, the RW crowding gate closed over the screen in time to contain the rampaging rhino. This video loop made the multitudes flock to RW’s booth.

Aurora Storage achieved an intimate look through the interactive stories of individuals discovering their pasts. And Richards-Wilcox Conveyor comes to life with its own machine-part menagerie: mechanical monkeys swinging on the overhead systems, lions on the line, gorillas made of gears grabbing attention all over the tradeshow floor.

There’s a lot to think about when creating brands and ideas this big. But remember this: if you want to fly, you’ve got to launch first.