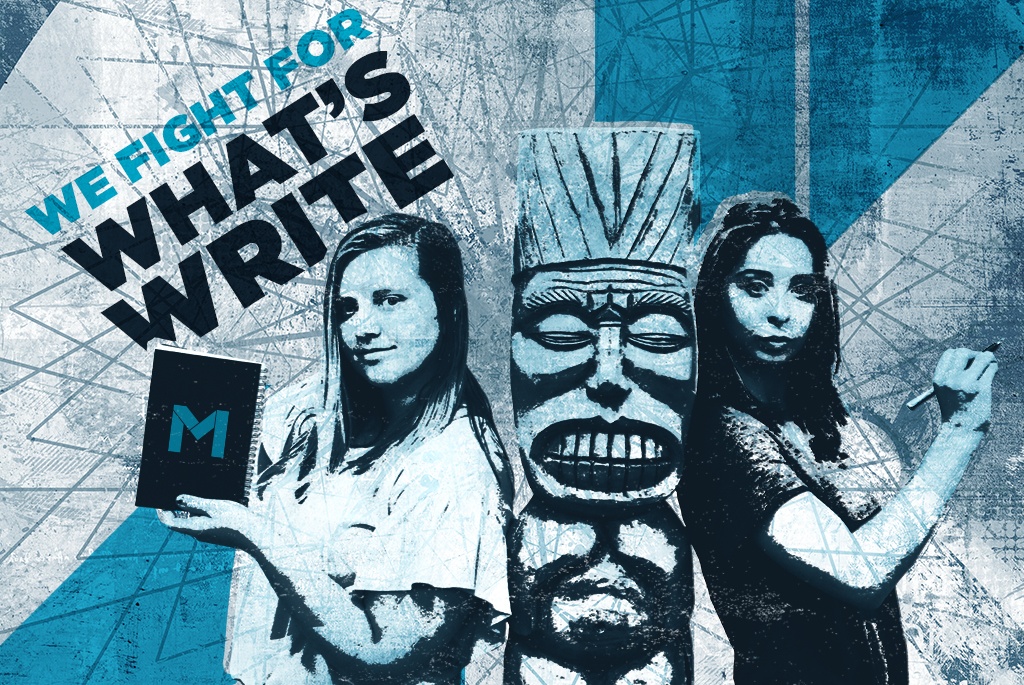 We’re pleased to report that both interns have survived 10 days (possibly 11, or even 12, depending on when you read this) of MACLYN’s Not-Your-Average Summer Bootcamp.

They’ve encountered many challenges along the way, most of which were our fault.

They’ve crawled under great lengths of metaphoric barbed wire, performed thousands of strenuous, symbolically significant chin-ups, and scaled more than a few allegorical mountains (don’t worry – by the end of this, they’ll have scaled an actual, bona fide mountain*).

*Technically, it’s a very large hill. Still, nothing to sneeze at.

Our interns have had an excruciatingly awkward encounter with Tiki and lived to tell the tale.

They’ve even survived a quick but violent scuffle with the large, pituitarily-gifted rodents that loiter in the MACLYN parking lot after 5 PM. Well done, interns.

Anyway. To celebrate their survival and thrival (it’s not a word, but WE ALL KNOW IT SHOULD BE, MERRIAM-WEBSTER), we sat down with the ink-stained duo to get their intern-most thoughts on all things MACLYN.

Katelyn: It’s what I hoped for, but not necessarily what I expected.

Britanni: I’m trying to think of a word.

B: There’s a lot of passion. Everybody really cares about the work. It’s not just, like, they’re trying to get things done. They genuinely want to do a good job, no matter what.

K: It’s super-hip, which I expected. But it’s not cut-throat, either. It’s a place where the best ideas rise to the top.

B: They don’t take themselves too seriously, which is nice.

K: I always get worried going into a new place. Like, what are the people going to be like? Everyone here is very welcoming.

B: There’s a lot of different personalities, but they all kind of work together.

B: It’s definitely fun to listen to.

K: You can have a creative outlet and get paid for it. Pretty cool.

B: Being here has gotten me more excited about advertising. There’s literally no limit to what you can do.

K: It’s cool that this exists.

[Katelyn makes a swinging-motion at an imaginary piñata.]

K: One of them brought donuts yesterday.

B: Yeah, donuts. That was pretty sweet.

[The interns close their eyes and reminisce.]

B: We were terrified.

K: We were both just sitting there, like, “I think we’re just supposed to sit here. And not talk.”

B: And then you’re, like, nervous and trying to think.

B: It gets super meta.

K: Once we learned that we were allowed to talk, it became a lot more fun.

K: Heaven. And then, probably – have you seen Futurama? That episode where Fry gets, like, a hundred cups of coffee?

K: Anyway. It’s just, like, heaven. Until it becomes the worst possible thing. Then, time stops.

INTERN-MOST THOUGHTS: THE ENEMY OF AVERAGE

B: Everything you do, even the small things, you think, “I can do better. This is just the bare minimum.” I’ve caught myself, like, “Oh, this is fine!” And then I remember we’re not supposed to say that. Ever.

K: You’re not supposed to be “okay” with things. You’re supposed to always want to do greater. That’s very “me.”

B: His eyes are closed, but you know he’s watching. Which is kind of scary. But kind of cool, too. Yesterday, we learned he’s not just a thing. He’s an idea.