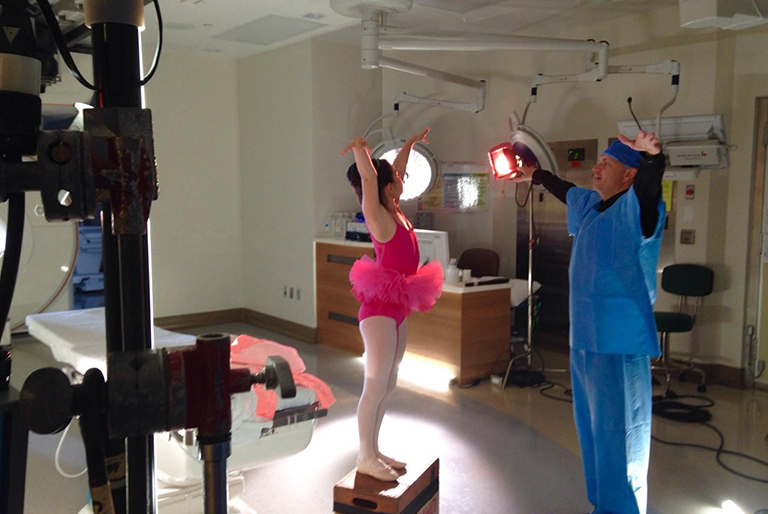 A ballerina, a creative director and a camera crew walk into an operating theatre…

Now that we have IMRIS’ Core Creative Idea, it’s time to craft the vision with stunning imagery, video and branded content.

Join our team as we take you into The IMRIS Surgical Theatre, where we joined forces with some of the industry’s most respected photographers and filmmakers on a mission to breathe life into the “Human Experience” brand.

We really got into character. Before entering the surgical theatre, every member of our creative team had to don surgical scrubs.

Troy Kelleher, Senior Copywriter: “We get to the hospital. Before they say ‘Hi,’ the clinical team lines us up and asks, ‘Do you have any prosthetics? Any implants?’ Then, they remind us that, if we have any ferrous metals inside ourselves, it’s possible the MRI (which is magnetic) might remove it. As in, forcibly. It was pretty intense.”

Johnny Tijerina, Senior Art Director: “Before going into the surgical theatre, all of us had to ‘scrub up.’ It’s funny; we spent all this time during Discovery & Ideation trying to think like neurosurgeons. Now, we’re dressing up like them.”

Jay Paonessa, Creative Director, VP: “I’ve been on some exotic sets. But this was like nothing else.”

“I took an anatomy class in college,” said Senior Art Director Johnny Tijerina, who could easily pass as a surgeon (or maybe a surgical tech).

Johnny: “It was strange, being on-set at a real hospital. On the one hand, we’re all pumped-up. We’re excited to shoot. On the other, we’re going into a sacred space. Lives have been saved – right here, where we’re standing. It was heavy.”

Jay: “The drama was already there. Our job was to bring it out.”

To recreate an authentic surgical atmosphere, our creative team worked with a clinician who has consulted with NBC’s “ER.”

Jay: “Our target is the neurosurgeon, and the neurosurgeon is incredibly precise. They have a superhuman attention to detail. So, if there’s a discrepancy in our brand – something unrealistic, like a tool out of place – they’ll catch it. It’ll bother them. It could remove them from the experience altogether.”

Johnny: “We’re showing surgeons that IMRIS understands them; so, obviously, the surgical scenes have to look RIGHT. Not a scalpel out of place.”

Jay: “There wasn’t any room for error. Our audience demanded authenticity.”

Senior Copywriter Troy Kelleher goes under the knife for authenticity.

Troy: “The IMRIS brand is half-fantasy, half-reality. You have these fantastic scenes of ballerinas pirouetting across the OR table, violinists playing, stuff like that. But then, you juxtapose that fantasy with reality: authentic scenes of surgery in the OR. It’s very important for those scenes to be just as realistic as the other scenes are unrealistic.

“To build the fantasy, you have to start with reality.”

Jay: “We actually worked with real surgical staff to build the scenes. One of them had consulted on the show ‘ER,’ and he was instrumental in crafting authentic medical environments that bring the audience into your world. He helped us make it immersive.”

Johnny: “Every detail – from the instruments, to the position of the characters, to the movements of their hands – we made it real.”

An MRI has the potential to rip cameras from the hands of filmmakers and tear them to shreds. We tried not to let that bother us.

Johnny: “Having access to a real IMRIS Surgical Theatre was perfect. Just what we needed. It was also a major challenge.”

Jay: “You’re working in tight quarters. Like, microscopic. It’s like filming a movie in a closet. You’re also in a sterile field; so, you have to be careful about what you bring on-set. No snacks. To make it even more difficult, there’s this giant magnet, this 8-ton beast moving toward you. If it gets too close, it will rip that very-expensive camera out of your hands and grind it to dust.

“That’s filming in the operating room.”

Johnny: “Normally, what you actually see on-camera is a very small part of the set. Maybe 5-percent. The rest is lighting, cameras, rigs, cast and crew. The operating room was different. Most of the space was on-camera; so, we had to pack everything else into the corners of the room.”

Jay: “Filming in the surgical theatre was tough, but essential. If we had filmed it on a set, our target audience, the surgeons, would have noticed, and it would have pulled them out of the experience. We had to make it happen… you can’t let a logistical challenge interfere with the creative vision.

“Nothing gets in the way of the creative.”

UP NEXT… MAKING THE IMRIS BRAND, PART 5: LAUNCH.